ALL BUT WAR IS SIMULATION(2020)
2-channel video installation

All But War Is Simulation is a lecture-based 2 channel video installation. The work seeks to address the status of representations of violence in images and media by combining theory, popular culture, poetry and personal experiences with overarching themes of migration, militarization, and digital technology.

It blends historical record with speculation and theory, taking a document from the Bosnian War as its starting point: a soon-to-be refugee’s Post-It note that details a list of possessions to take before the family’s eviction. All the items are linked to preserving memory in some way – highlighting both a longing for an ideal past and the everyday experience of war; where survival becomes routine, and one’s life is reducible to a few simple items. The record is neither a picture nor a poem, at once a textual document and an image, it speaks of the various dimensions of loss connected to the experience of war and displacement.

This forms the anchorpoint of the work to further interrogate the experience and perceptibility of war by examining how warfare is visualized and mediatized in the context of technological globalization. I depart from historical views that see battlefields as terrains of ultimate unpredictability and examine how images and computerized simulations of conflict have been implemented as response to combat chaos and calculate predictability.

The work analyses ways in which modern-day mechanisms of visuality are still governed by a logic of warfare and addresses the increasingly technological properties of both picture and poem. 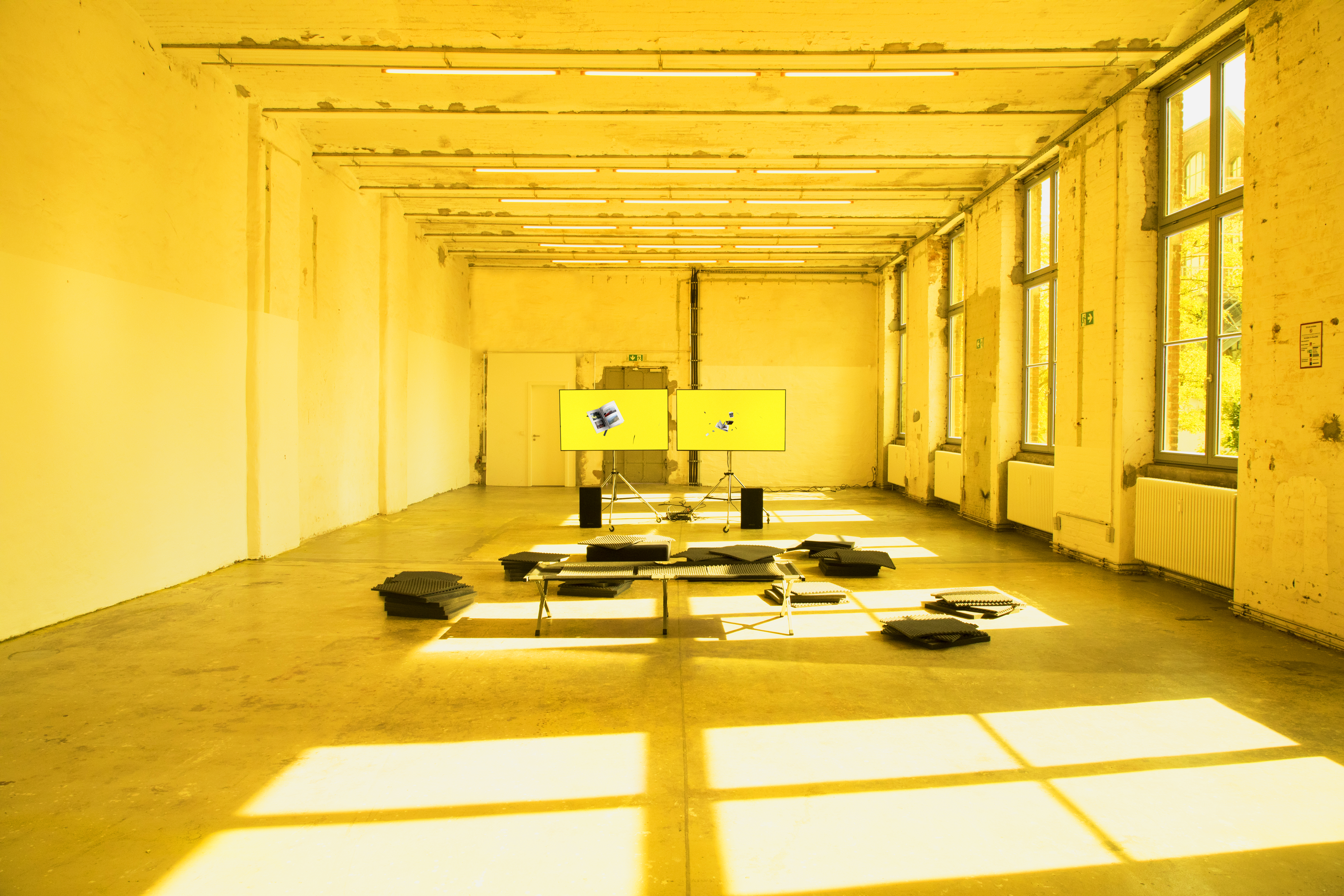 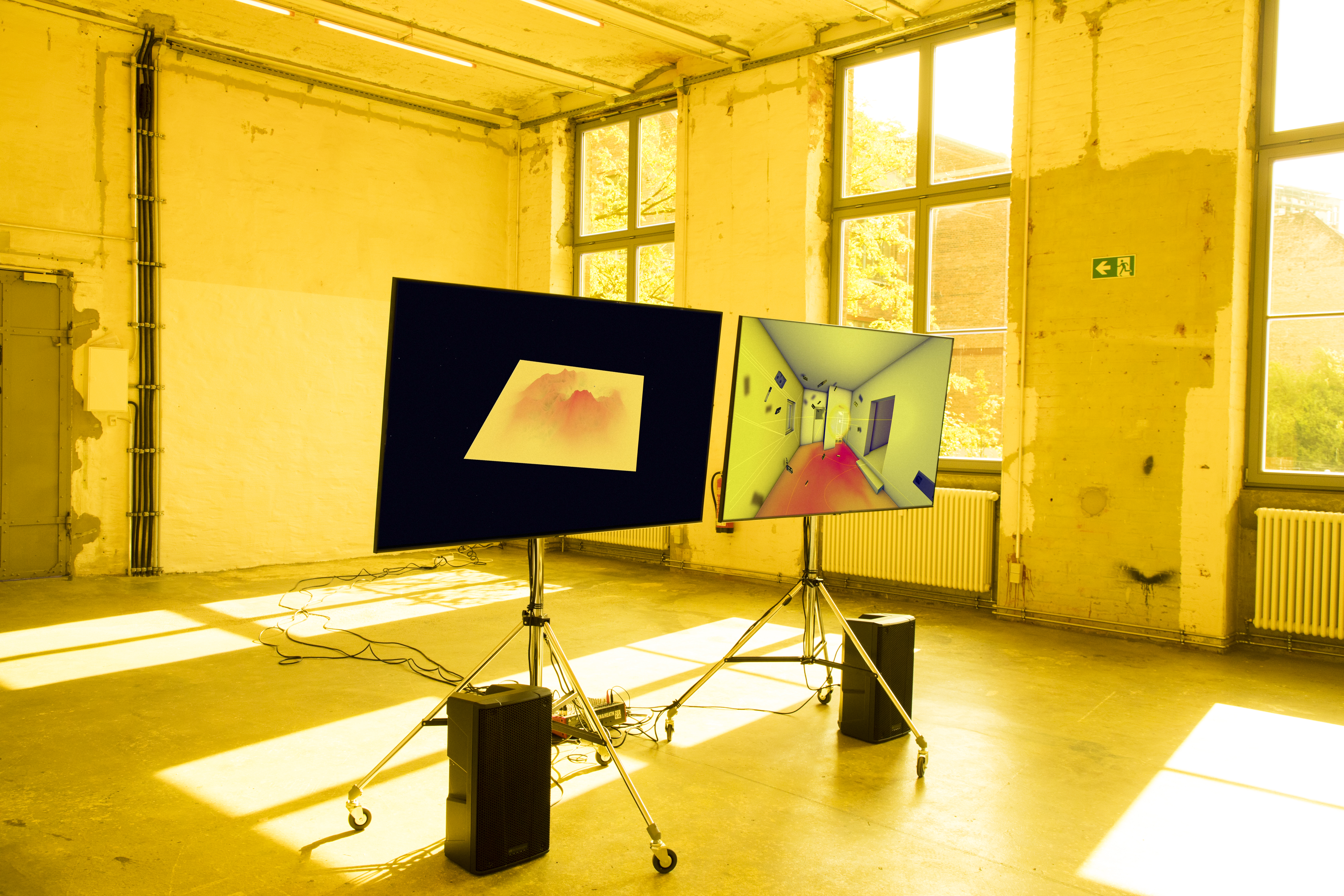 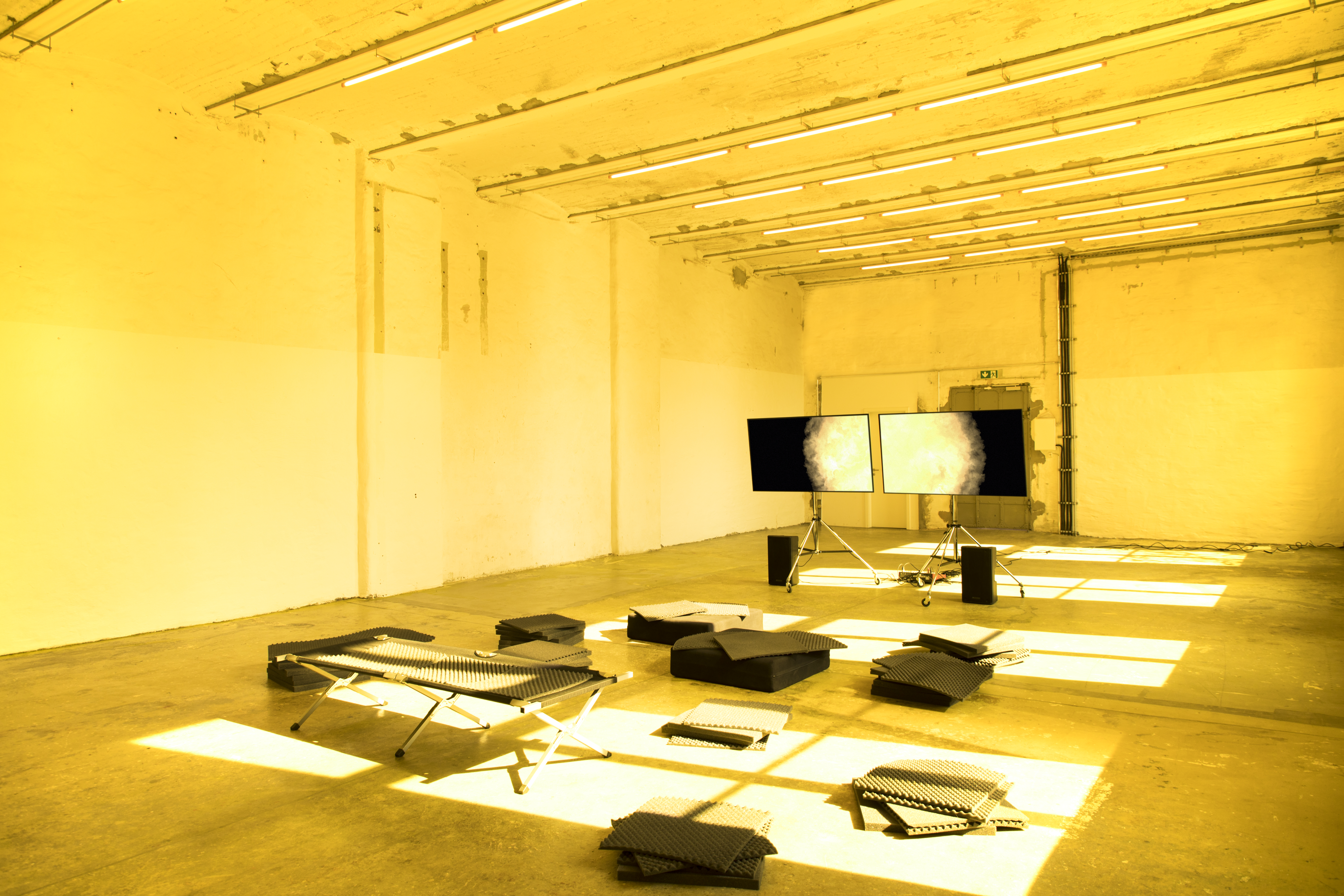 Installation view: solo show All But War is Simulation
Callie's in collaboration with FRAGILE Berlin DE 2020 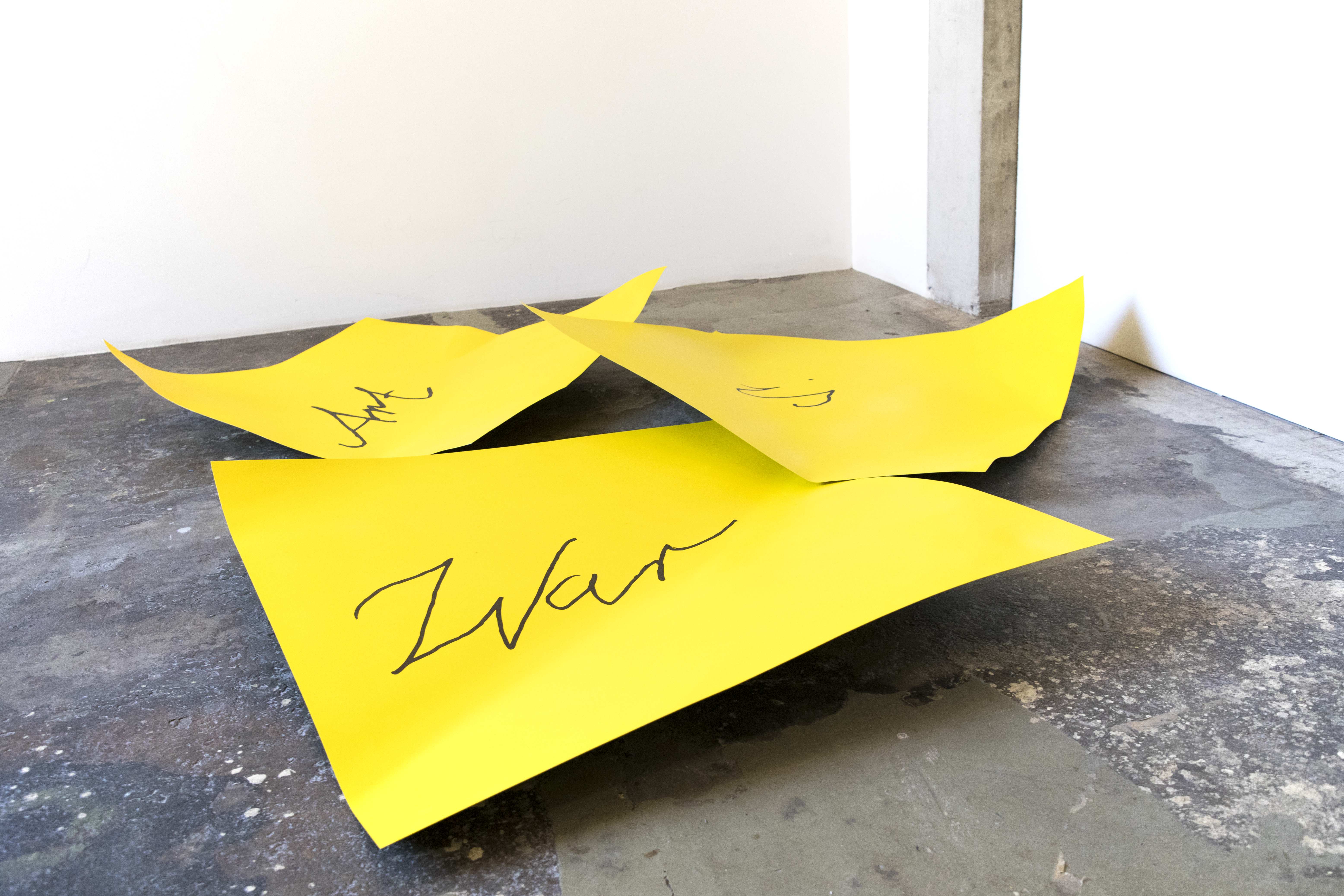 Installation view: solo show All But War is Simulation
Callie's in collaboration with FRAGILE Berlin DE 2020

In collaboration with Gago Gagoshidze and Hito Steyerl

Mission Accomplished: BELANCIEGE is a lecture-based 3 channel video installation written and produced together with Giorgi Gago Gagoshidze and Hito Steyerl.

In this work we turn to fashion using the example of luxury brand Balenciaga as a way to reflect political and cultural changes 30 years since the fall of the Berlin wall. The brand’s omnipresence forms our departure point to diagnose pressing political issues of our times e.g. the instrumentalisation of meme-logics across various levels of contemporary cultural production, the role of weaponized algorithms in political advertising and audience targeting and the function of monopolist platforms in relentless profit-making and brand- propagation schemes.

We criticize these branding strategies and consider them paradigmatic for current structures of disruptive value enhancement, contextualizing such mechanisms by drawing on rampant privatization that emerged in the former ‘East’ after 1989.

One of the central tropes deployed throughout this work subverts the common belief that sees the ‘Eastern European’ experience as one of lagging behind.

Instead we turn to this context as a way to extract clues that can help navigate our present moment characterized by extreme economic inequality and widespread forms of privatization that are becoming the norm worldwide. 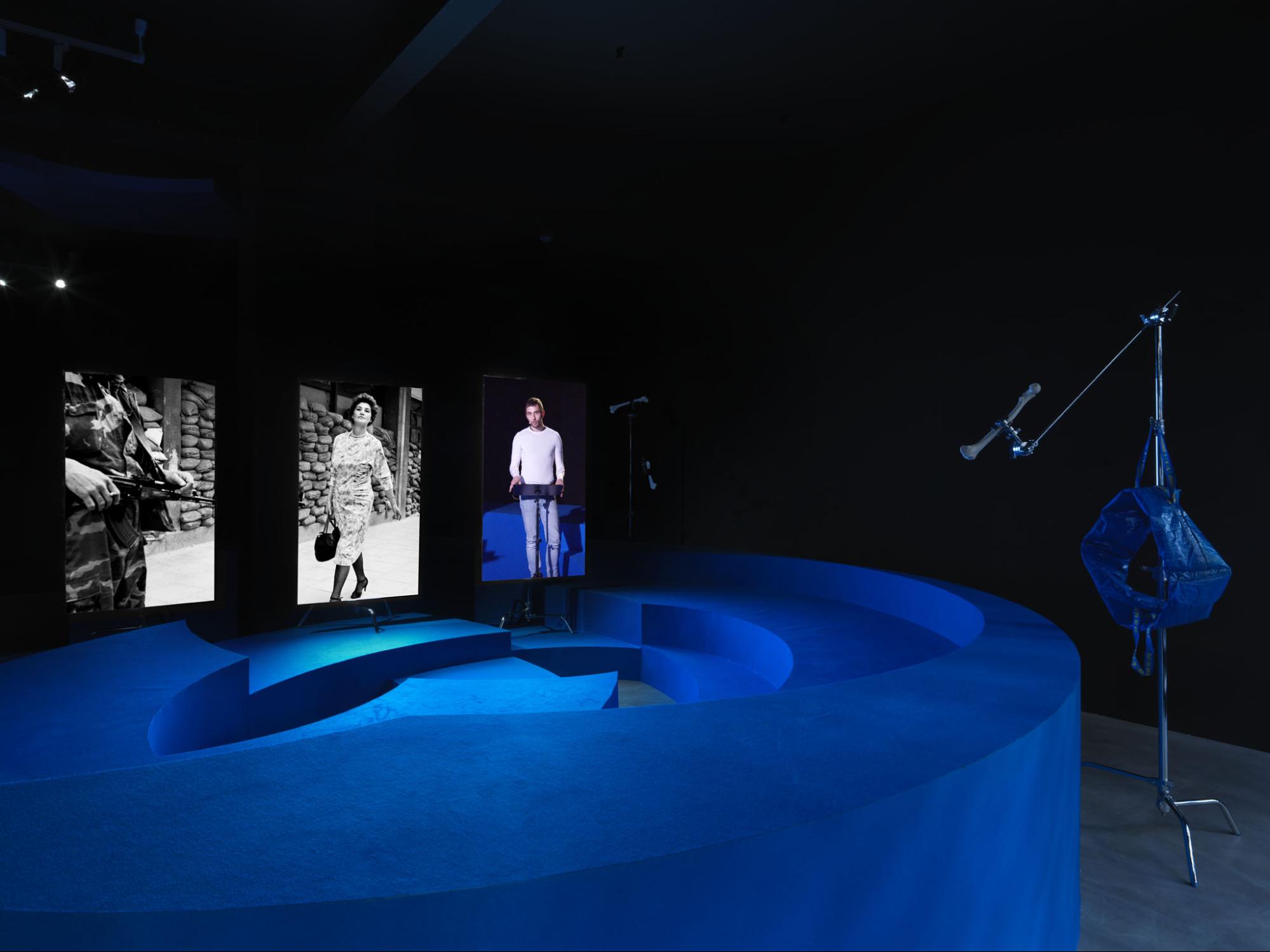 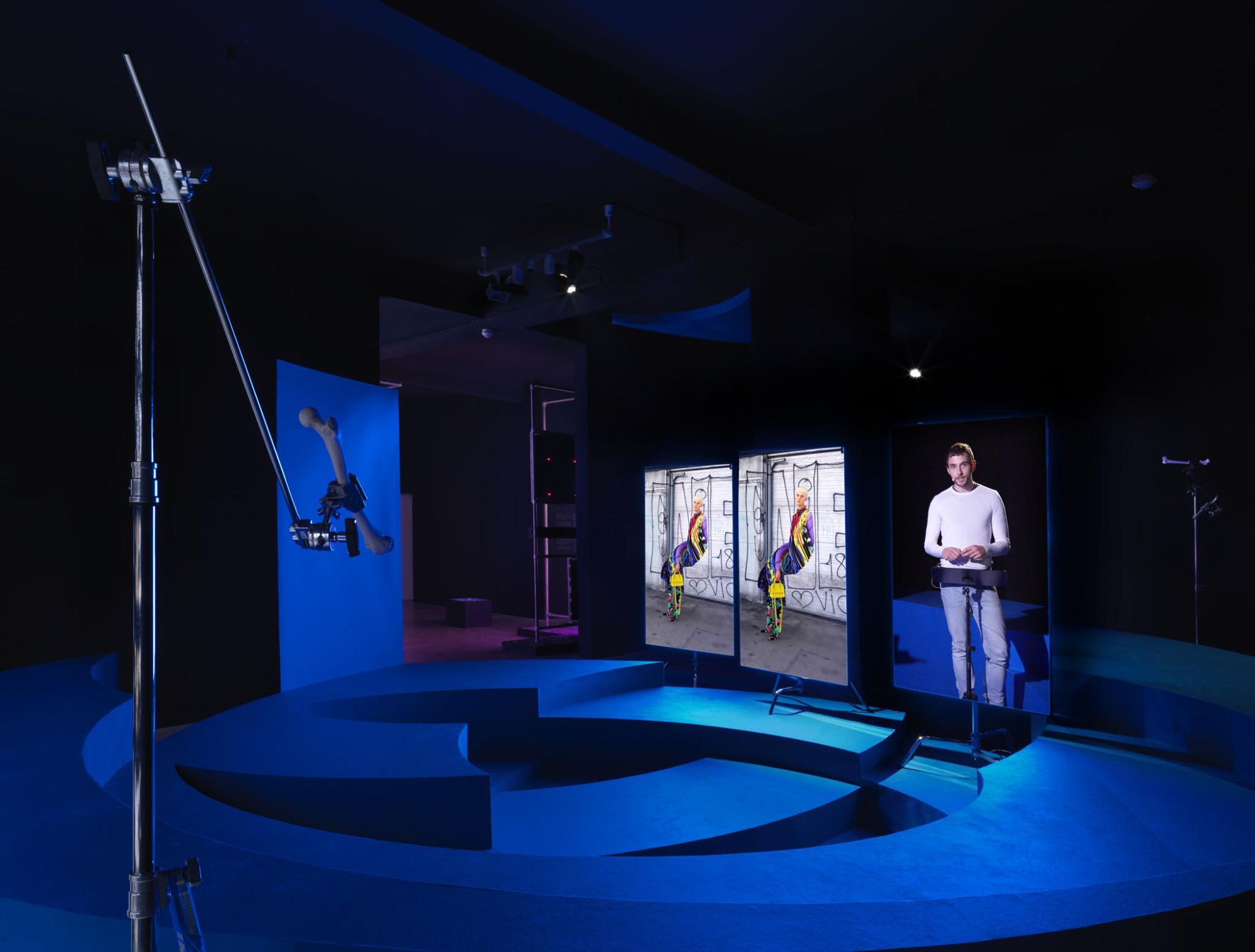 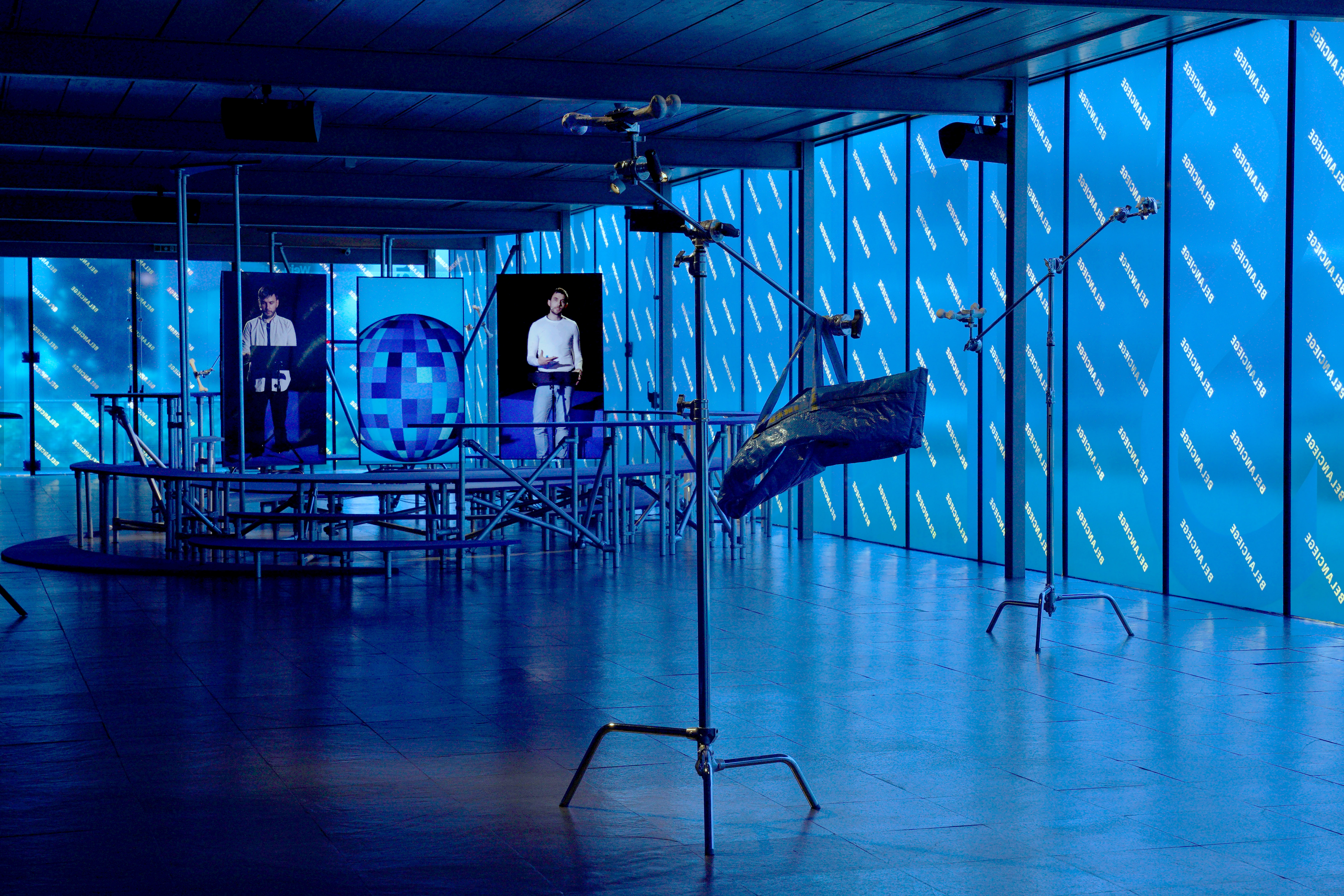 RA-TA-TA deals with the articulation of war and violence. In game-like environments the sound of machine guns, bomb drops and other forms of war-play are produced through language. The original sound effects are substituted with childlike synchronizations that articulate what is seen on the screen.

In doing so, it naively emphasizes the mechanisms of war through an interplay of words rendering them evermore impalpable. 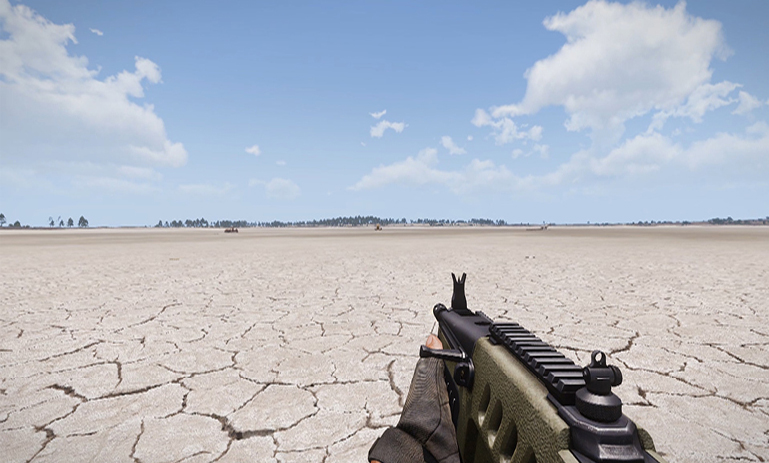 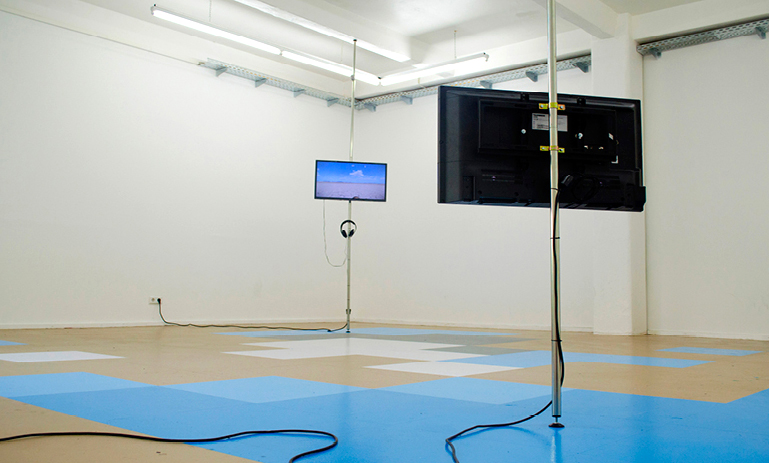 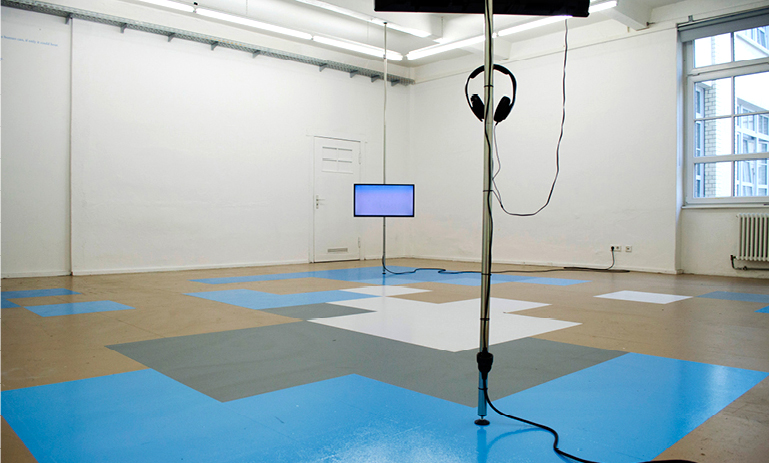 Installation view: In The Clouds Is Where We Want To Be
Künstlerhaus Bethanien Berlin DE

XYZ problematizes the present-day visualization of data and information which in essence is not perceptible to human beings. In this work the human voice gets singled out as the main interface that echoes in vain search for responsiveness.

The video is structured as an online tutorial that gradually turns into self-talk. The work questions the viability of standard modes of communication in our information age. 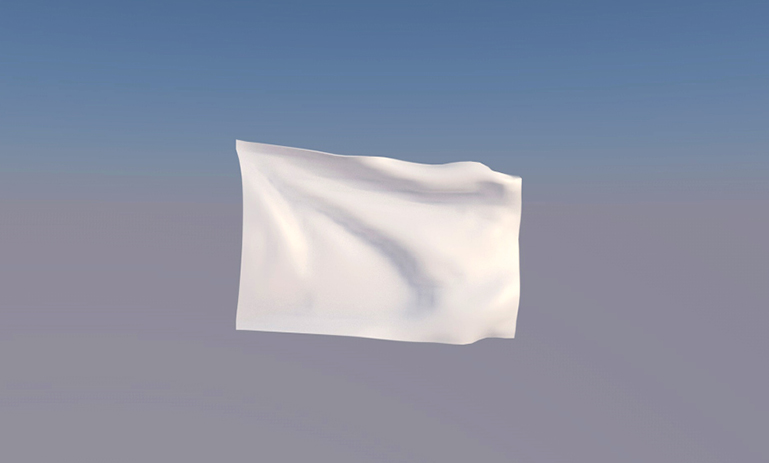 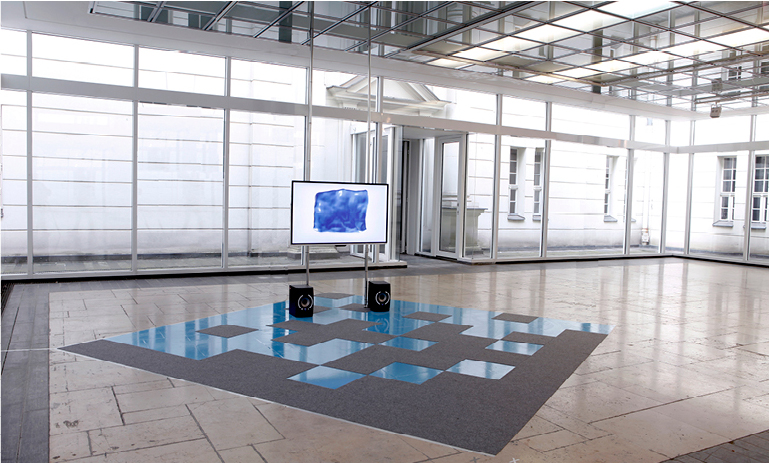 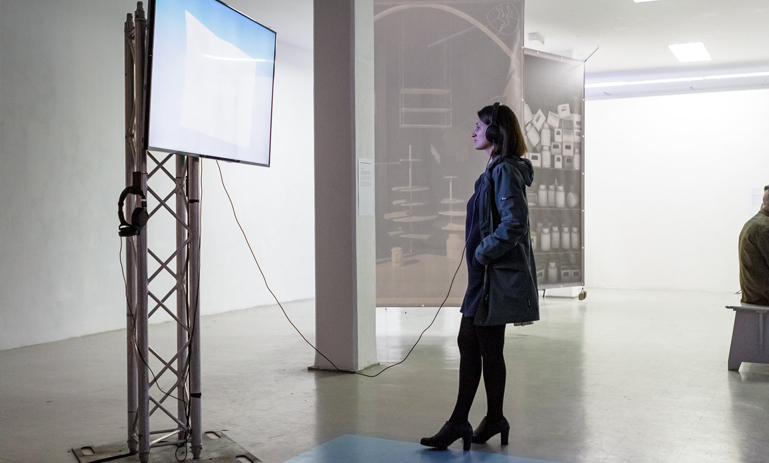 Nothing Really Matters is a lecture performance that addresses the defining role of mountains in the conception of borders. The lecture is modeled after a journey partaken between two hometowns and looks at the strategic, geopolitical and often poetic dimensions of mountains in the relation between being and belonging.

It highlights the pivotal role of mountains in developing ideas of individualism contoured during the Enlightenment and puts them in perspective with a technological paradigm defined by pretences of social interaction. In this lecture, the mountain becomes a metaphorical device to address current conceptions of migration, cohabitation and coexistence. 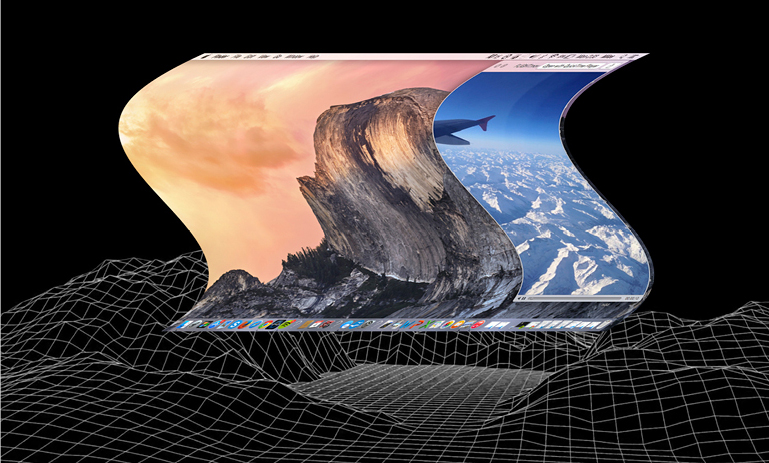 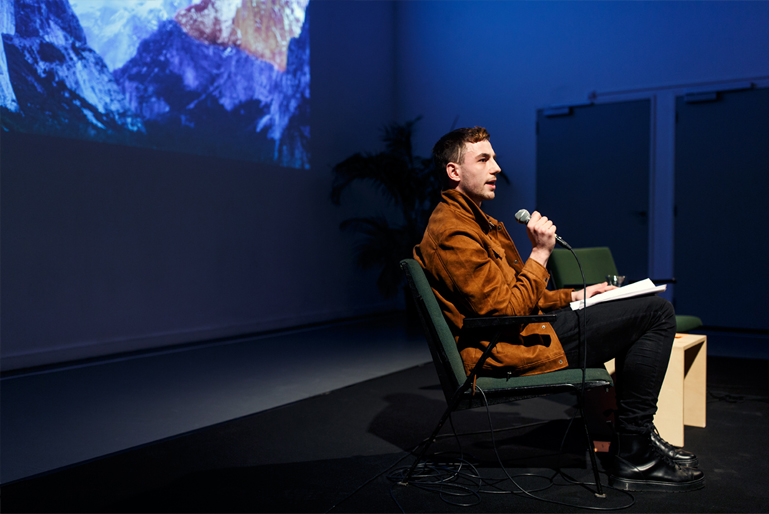 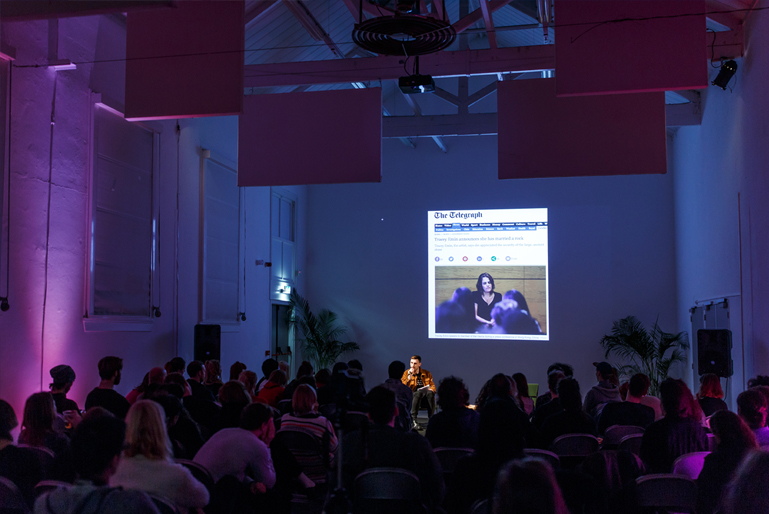 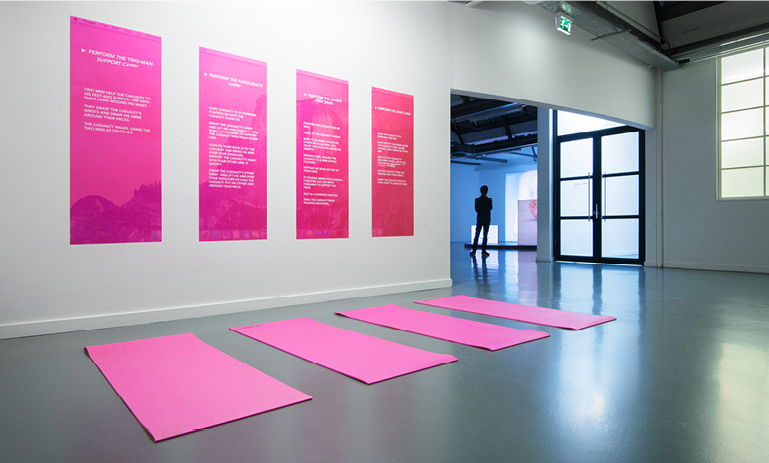 A series of limited edition artist flags, made on commision by Arte Concordia, Rotterdam NL 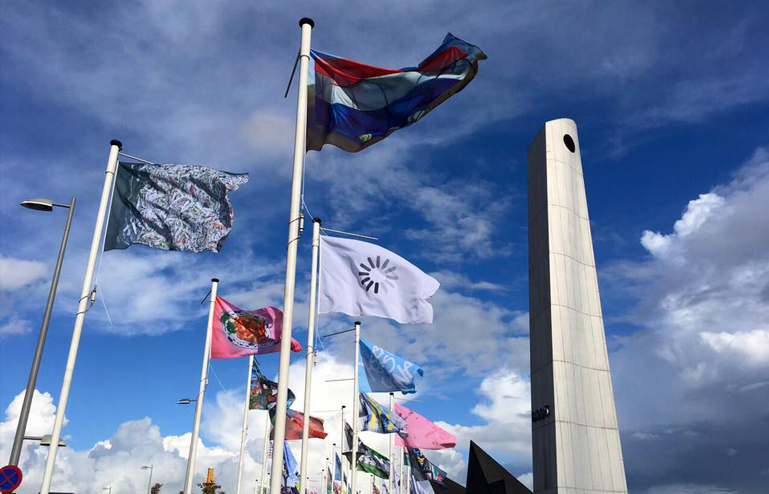 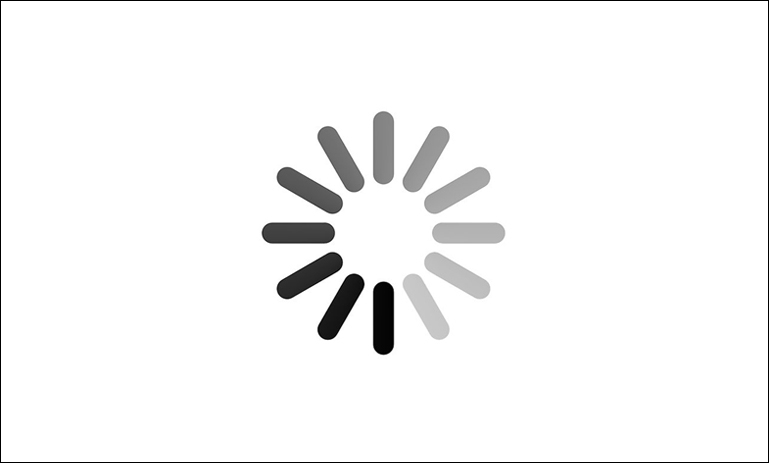 RETROCEDING THE POLITICS OF REPRESENTATION (2015)
Lecture

Retroceding the Politics of Representation is a lecture that focuses on the visual and symbolic representation of Yugoslavia. In the lecture I offer an interpretation of Slavko Pengov’s epochal 1947 mural in Villa Bled, Slovenia depicting ‘Mother Yugoslavia’ — a stoic and oddly masculine symbol of this, at the time, newly formed socialist country. In this work I examine the different modalities of subjectivity that this figure embodies.

I do this by assessing how Yugoslav ideology aspired to develop particular ideas of nationhood and belonging and how these were represented. In the lecture I speculate on the continuation of such mechanisms of subject formation first through cinema and the democratization of film and subsequently the rise of the Internet and the global mediation of images. 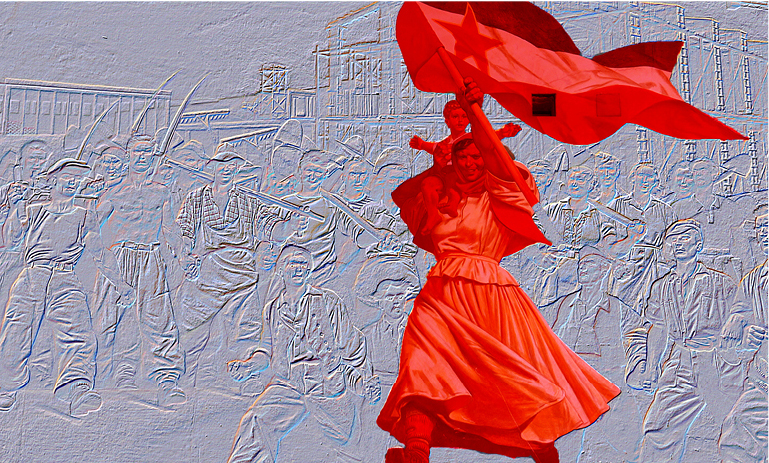 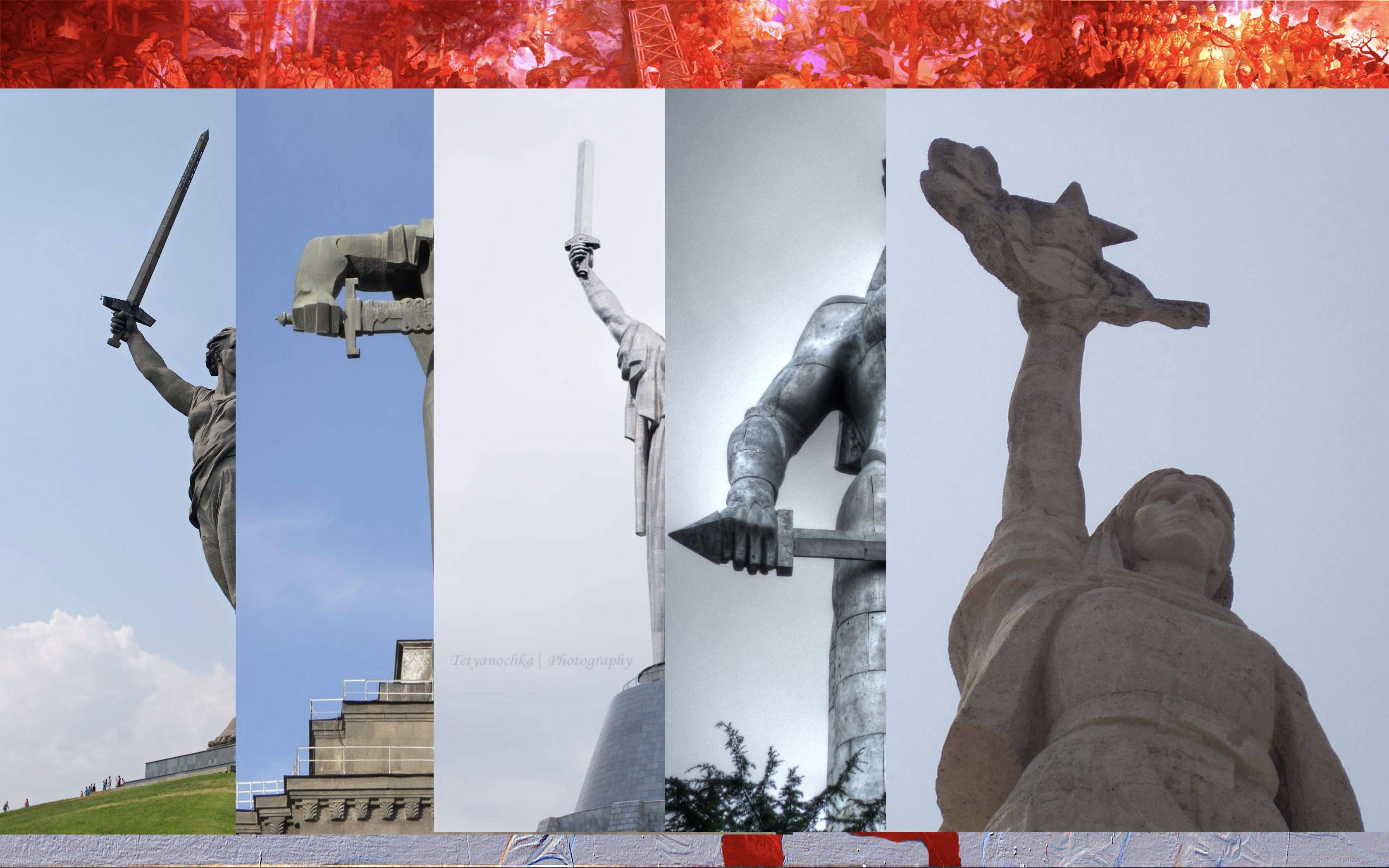 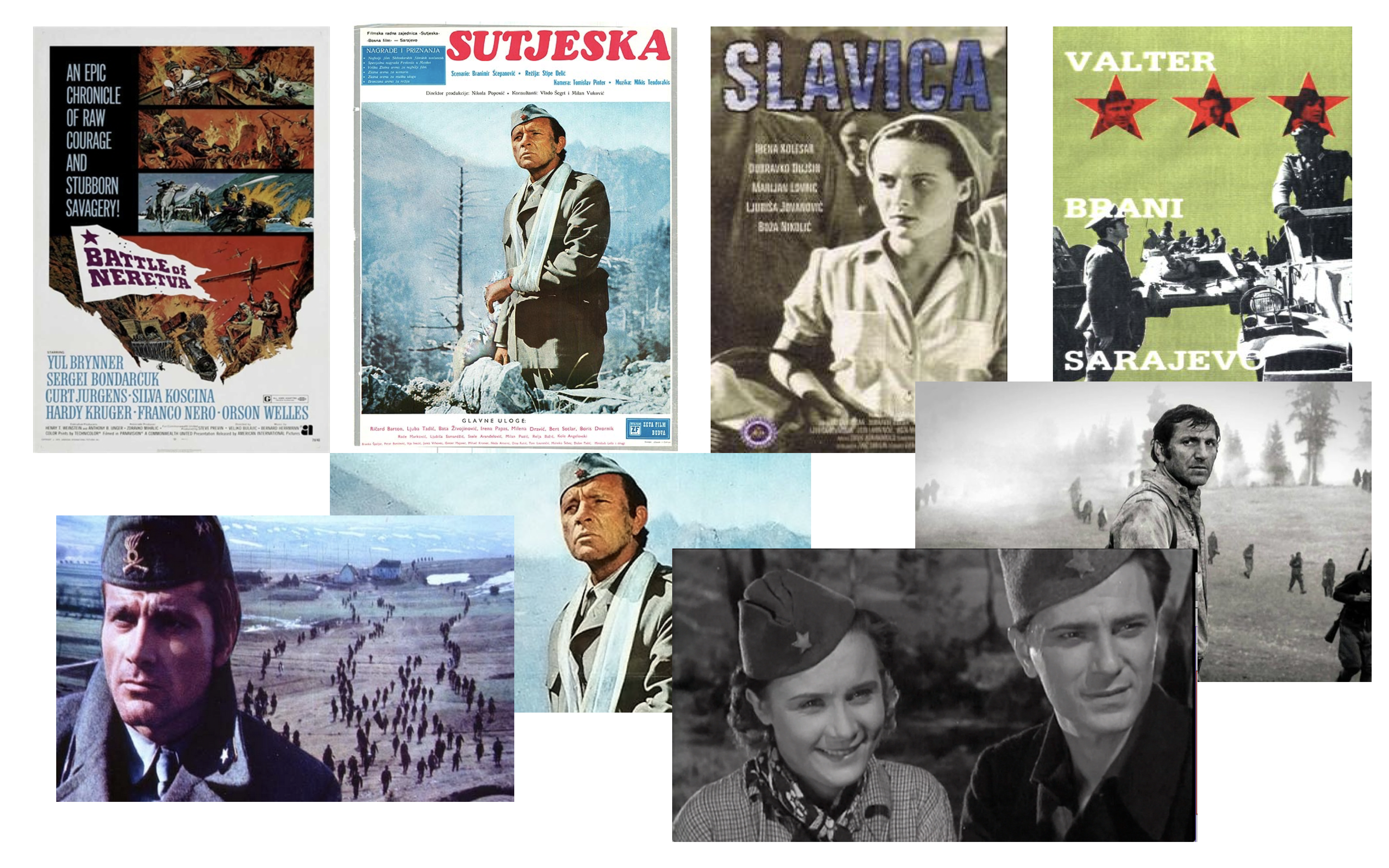 In collaboration with Nora Turato

Mother deals with the increasing automatization of language in the digital paradigm. Transmissions of language-based forms of communication are increasingly codified and cancelled from our material environment. Language is no longer only confined to the human body.

This work responds to this paradigmatic shift by reflecting on the notion of mother tongues. It is structured as a poetry slam; a verbal vomit that addresses an increasingly ambigious relationship between the production of language and the human body. 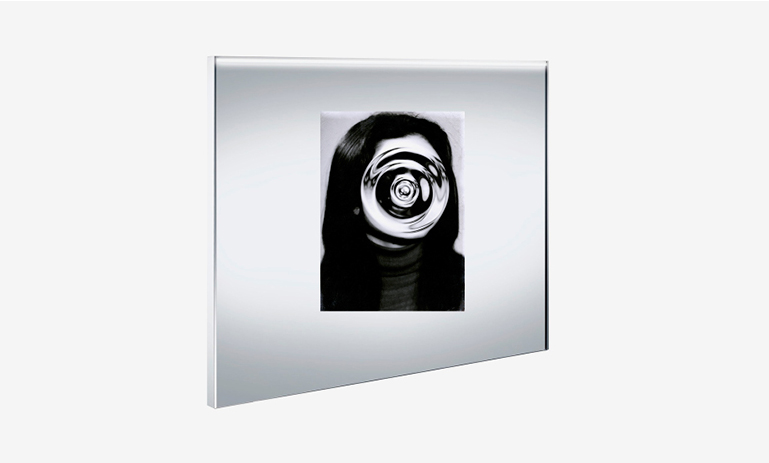 This video goes back to the Winter Olympic Games held in 1984 in Sarajevo Yugoslavia (present day Bosnia and Herzegovina) and addresses the ramifications of war that followed shortly after. Many of those former Olympic venues have been used as military artilleries during the 1992-1995 Bosnian war. These were sites built for the glorification of bodies through athletic accomplishments that were subsequently repurposed for the obliteration of bodies during the Bosnian war.

This work juxtaposes both of these events and puts them in perspective with a simultaneous global proliferation of technologies of mediation and the rise of the World Wide Web. It interrogates concepts of materiality and immateriality with regard to war and technology thereby always drawing relations to the human body. 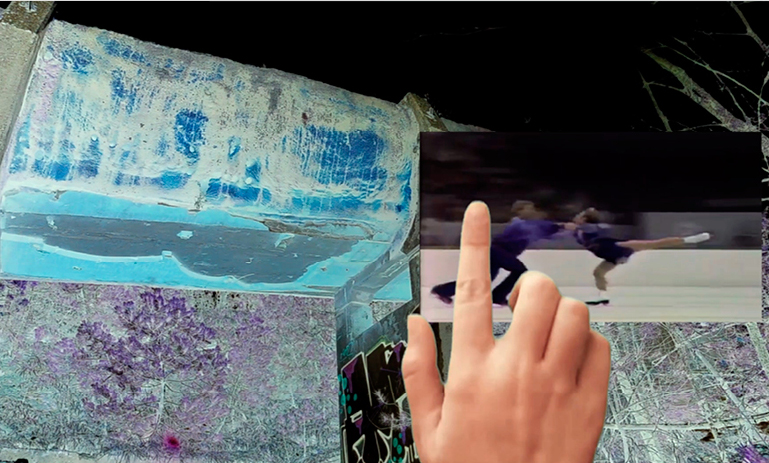 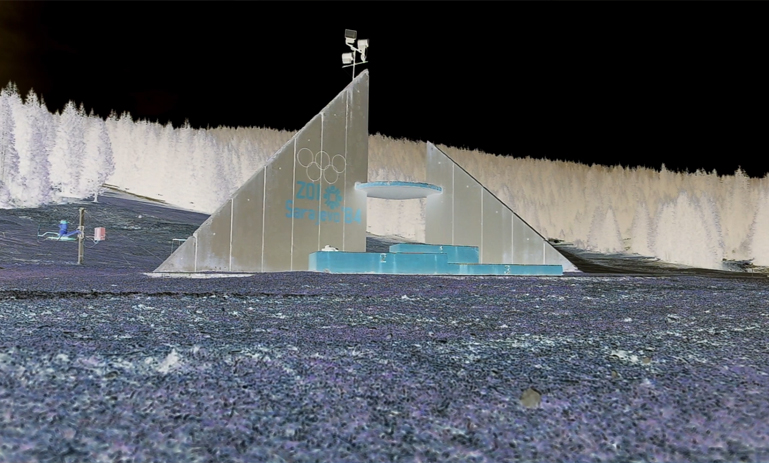 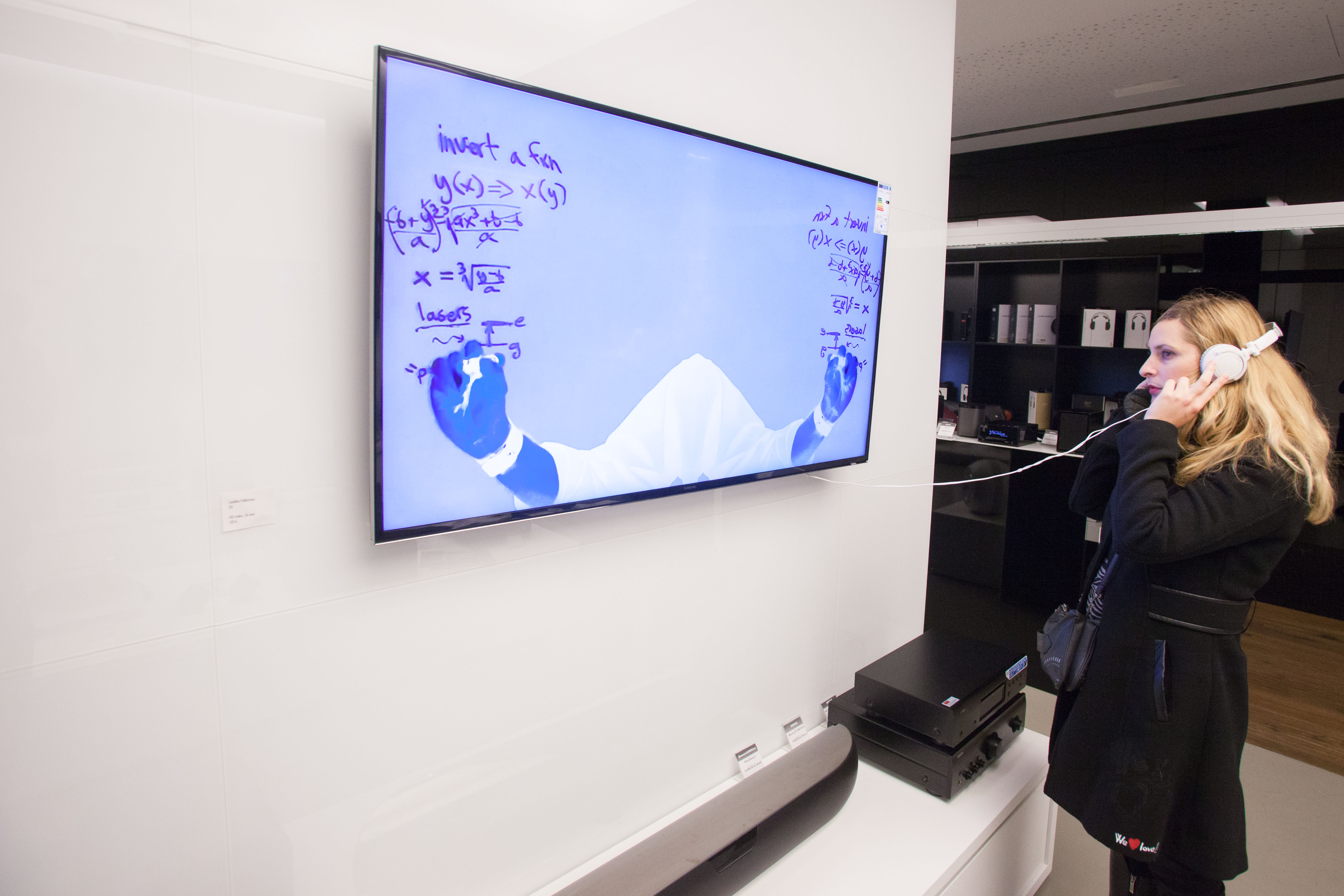